Starting in the initial position as illustrated, players take turns making a move. White figures go first.
The objective is to capture both of your opponent's golden rings.

When rings are placed on a figure they give it different 'powers' to move, according to the ring's colors, as shown in the table below. The order of the rings does not matter. Figures with no rings cannot move. 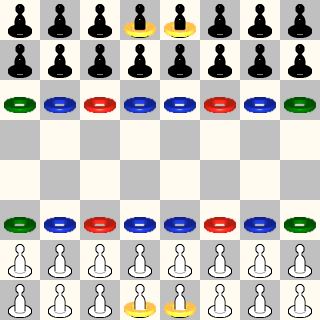 When rings are placed on a figure they give it different 'powers' to move, according to the ring's colors, as shown in the table below. The order of the rings does not matter. Figures with no rings cannot move.

Each move has two parts:
1. Ring Move (optional, may be skipped)
a) You can pick up the top ring from one of your own figures and place it on any other figure or square anywhere on the game board, or
b) You can pick up a free ring (one that is not placed on a figure) and place it on one of the adjacent figures, but only if the ring is surrounded by more of your own figures than your opponent's (counting the 8 adjacent squares). The maximum number of rings that can be placed on any figure is 3.
2. Figure Move
Move one of your figures according to its powers (it may or may not be the figure that took part in the ring move). A figure may not jump over other figures or free rings and it cannot land on a square occupied by a free ring. You can capture an opponent's figure by moving to a square it occupies. The captured figure is removed from the game. If the figure has any rings, one of them must also be removed from the game (the 'tax'), but the rest of the rings (if any) may be kept as 'loot'. The player making the move can select the ring(s) he or she wants to keep and place them on any figure(s) or square(s) on the game board.

When a player has at least one golden ring, but cannot make any move (and there is no Ring Move possible that would enable him or her to make a move), then the game ends in a draw.